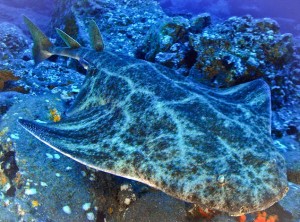 Angel sharks are unusual sharks in having flattened bodies and broad pectoral fins that give them a strong resemblance to rays. They occur worldwide in temperate and tropical seas. Most species inhabit shallow temperate or tropical seas.

Angel sharks are typically whitish with red, brown, and grey splotches but certain individuals have been recorded as dark brown to black with blotches of black and brown shades. The particular coloration of Pacific angel sharks allows them to camouflage themselves with muddy and sandy bottoms. It is not rare to dive above them without even seeing them! 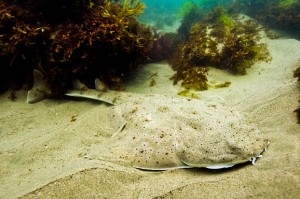 The reproductive cycle of the Angel shark is typically annual with a gestation period of approximately 10 months and the births occurring primarily between March and June. Angel sharks are ovovivipary, which means that the eggs hatch inside of the mother’s body. The fecundity ranges from approximately 1 to 10 eggs.

Angel sharks are most commonly found alone but they may occasionally be spotted in aggregations. Adult Angel sharks are considered semi-nomadic, and have been observed to spend several days in one location and then move to another. They spend the daylight hours waiting on the seafloor for suitable prey, moving only to quickly ambush attack their source of food. At night, they actively forage for food. 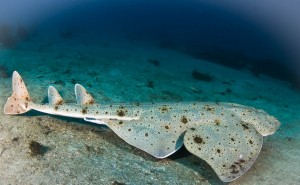 There is little known about communication and perception among Angel sharks. It principally utilizes its eyes (on the top of the head) and sense of feel while it camly lies in wait at the bottom of the sea floor for prey. These sharks are known to be electroreceptive, utilizing electric fields to locate prey. While many species of sharks must swim in order to breath, Angel sharks have muscles that pump water over the gills and through the spiracles so that it is not necessary for them to move, an adaptation crucial to their ambush style of feeding.

Angel sharks are carnivores that primarily feed on bony fish and cephalopods (squid and octopus) but are known to consume crustaceans and other types of mollusks as well. 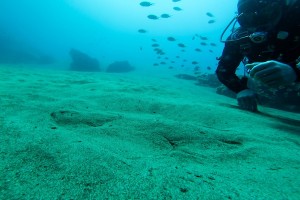